Running Naked…. BUT With Clothes on AND a Target on My Back 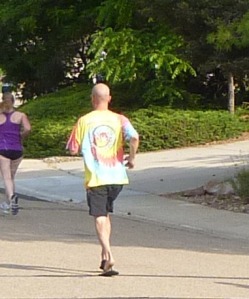 A few weeks ago, I was unable to sleep one night and as I lay there at 4:30 a.m., I decided that in thirty minutes I was going to turn on my “Couch to 5K” app and head out the door.  I was going to be a runner.  It would be a new everyday routine .  I would run at 5:00 a.m., experience no embarrassment (no one would see me), be back to the house before anyone was awake and in the darkness of the early morning become a seasoned runner that could eventually show herself in daylight with no shame.  I had it all planned out.    But then I started thinking, “what if others are out running at that time too” and I remembered that I probably didn’t have great running shoes or clothes to run in, so when 5:00 a.m. rolled around, I decided to skip it and go buy some running apparel later that day.

However, I  later saw something that threw my excuses right out the window…. It was a man, who was obviously not running from anyone, but instead was running for pleasure, and on his feet were not fancy running shoes…. actually, no running shoes at all.  He was running in flip-flops.

Well,  to know me, you know that I love flip-flops… I wear them everywhere, even hiking.  So, I actually became inspired and went home and googled  “flip-flop running”…. not only did articles come up about running in flip-flops but there were articles about running barefoot.  Now, to really know me is to know that barefoot is the way I’d prefer to be pretty much at all times, so barefoot running was very intriguing to me… but before I can run barefoot I need to study up on it.

Okay, who am I kidding… deep down inside I want to be a runner but the reality of it all is that I have enough excuses to hold me off until, well, until I have no desire to run.   I once told my co-workers, which became a running(excuse the pun) joke for years,  “The only way you’ll ever see me run is by placing a target on my back with a gun in your hand”.  I definitely have to be motivated to run. (A 5K with zombies chasing me might work… keyword: might).

Recently, when brainstorming with a friend about ideas for teaching Hebrews 12:1 (vs 1b-And let us run with endurance the race God has set before us.), I was reminded of my whole running desire, barefoot running and having a target on my back.    I realized that sometimes I don’t want to “run”, much more, run with endurance… (this time I’m talking about spiritually running). Just like physical running, sometimes I need a reason to run, a reason to “get going”,  something to get me motivated or just to stop being lazy about my faith….. So what can possibly create that motivation?  A target on my back, of course.  A target that the enemy wants to hit.

Now, with a target on my back, not only do I have to run with endurance, but I have to focus on my run… where the path is taking me and where I need to go in order to dodge that bullet, or maybe even a missile, that is headed for me.   The first portion of Hebrews 12:1 says “let us strip off every weight that slows us down, especially the sin that so easily trips us up”  So now, I also need to release some things so I can run faster and dodge easier…. pretty much metaphorically get naked.

So, now I have a target on my back but I’ve thrown off everything that could weigh me down….you would think that now being “lighter” and having a clean, pure, faith-filled life, the target would be gone, the path easier and I could slow down. However instead, by throwing off everything, I just exposed the target and now it stands out more than ever.   Making my target more available and feeling exposed and vulnerable……I’m not so sure that this sounds like something I would want to do. It sounds more like something I would lie in bed and make excuses to get out of.  Why give up what is comfortable only to make myself a running target?   Hold on… Good news is coming…

If you keep reading in Hebrews, it says that by keeping our eyes on Christ we can do it. Why? Because if I have a target on my back, I want to make sure I know every place to run so I don’t get stuck in some dark dead end somewhere…. Also, keeping focused on Christ will give me the opportunity to see what he sees and behave how he does.  After all, he is God so he’s got it all figured out. Not enough reason to expose your target? Hang in there….there’s even more….and its my favorite.

A few weeks ago, I taught the kids about the armor of God…. And one very cool thing that I love to remember and also to remind others of is when looking at the armor of God, our head (helmet),  our heart (breastplate) our vital organs (belt), our feet (boots), anything coming our way (sword and shield)…. I am protected.  However, there is one piece missing…. There is still one exposed important part of the body that this armor doesn’t cover… MY BACK.  The place where that exposed target is…. BUT…. here is the best part ever… Christ has my back.  The target may still be there but by keeping my eyes focused on Christ, I stay on the path of protection and hope.  He’s not going to allow me to be hit….That doesn’t mean the enemy won’t attempt to strike…. It just means that I’ve got protection,  hope and excitement to get to the finish line.

Running naked with my clothes on, a focus and a protector ….. that’s a race that I can run.

Therefore, since we are surrounded by such a huge crowd of witnesses to the life of faith, let us strip off every weight that slows us down, especially the sin that so easily trips us up. And let us run with endurance the race God has set before us. 2 We do this by keeping our eyes on Jesus, the champion who initiates and perfects our faith.[a] Because of the joy[b] awaiting him, he endured the cross, disregarding its shame. Now he is seated in the place of honor beside God’s throne.

13 Therefore, put on every piece of God’s armor so you will be able to resist the enemy in the time of evil. Then after the battle you will still be standing firm. 14 Stand your ground, putting on the belt of truth and the body armor of God’s righteousness. 15 For shoes, put on the peace that comes from the Good News so that you will be fully prepared.[b] 16 In addition to all of these, hold up the shield of faith to stop the fiery arrows of the devil.[c] 17 Put on salvation as your helmet, and take the sword of the Spirit, which is the word of God.

18 Pray in the Spirit at all times and on every occasion. Stay alert and be persistent in your prayers for all believers everywhere.[d]

Posted by Nancy on September 8, 2012 in Devotions, Faith

Tags: armor of God, barefoot, Hope, Jesus, running, target on my back