RSS
← A tribute to unconditional love and Dr. Seuss..
The sinister plot …. and we are in it…. →

Unexpected Acts of Warmth and Love…. Why don’t we????

Thursday night I received an unexpected text message… It brought such a feeling of warmth and love. On Friday I wasn’t expecting calls from two different friends but the calls came and along with them brought an undeserved warmth and another touch of love.  An email on Friday also did the same.  Then there was  a smile today and a hug that one more time brought that warmth and love.  Oh yes, and a note of appreciation that completely humbled me….Pretty overwhelming when I think about them all together.  You might be thinking that all of that is not really that uncommon.  Maybe not,  but what made it so special was it was unexpected…. not that the expected hug from my daughter before she enters her school building or other family and friend expected acts of warmth and love aren’t wonderful too…. this was just different… these were unexpected acts that were totally from the heart… from one heart to touch the heart of another… I just happened to be the recipient and I was totally affected. 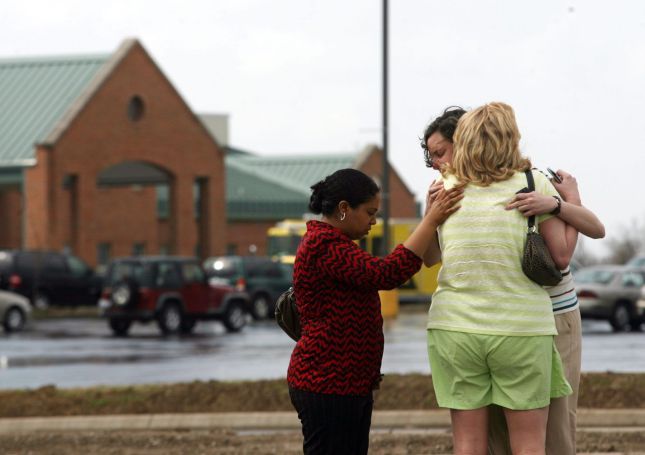 This afternoon I heard of the shooting in a church in Maryville, Illinois.  A gunman walked into the Maryville First Baptist Church and shot and killed the pastor during his first Sunday morning service leaving the congregation and community stunned.  Maryville was very close to where I lived in Illinois and I know exactly where the church is and even taught a child in school who attended that church.  It seemed to hit home.

When I started thinking about the situation……. the pastor, his family, the church family, their grief….. I wondered who might just have been that last person to have offered an unexpected act of warmth and love to the pastor.  You know, beyond his normal hugs and love from his family and close friends…. who offered him a hug of thanks or a note of appreciation?  Who sent him a text to see how his week was going and how someone could be praying for him?  Who told him that he had been a catalyst in a changed life?  I hope there were many…but the reality is, maybe there weren’t.  It doesn’t mean that people didn’t think it or feel it but maybe it was something that they felt was uncomfortable or timing was bad… sometimes it is just something we take for granted

I’ve been reflecting on this situation in Maryville because it happened to a pastor and I am a pastor but it’s not a setting irrelevant to others…… the Bible is specific that things happen without warning and without a lot of time to think about it … all the more reason to extend and Unexpected Act of Warmth and Love to others… A mentor, a boss, a neighbor, a friend, a family member and the list goes on……we all need them

My eyes are open and my heart is ready… I don’t want to miss an opportunity… and to those who made the calls, texts, emails hugs, smiles and notes… I doubt you have any idea how precious that was to me…. Thank you!

1“At that time the kingdom of heaven will be like ten virgins who took their lamps and went out to meet the bridegroom. 2Five of them were foolish and five were wise. 3The foolish ones took their lamps but did not take any oil with them. 4The wise, however, took oil in jars along with their lamps. 5The bridegroom was a long time in coming, and they all became drowsy and fell asleep. 6“At midnight the cry rang out: ‘Here’s the bridegroom! Come out to meet him!’ 7“Then all the virgins woke up and trimmed their lamps. 8The foolish ones said to the wise, ‘Give us some of your oil; our lamps are going out.’9” ‘No,’ they replied, ‘there may not be enough for both us and you. Instead, go to those who sell oil and buy some for yourselves.’  10“But while they were on their way to buy the oil, the bridegroom arrived. The virgins who were ready went in with him to the wedding banquet. And the door was shut.11“Later the others also came. ‘Sir! Sir!’ they said. ‘Open the door for us!’  12“But he replied, ‘I tell you the truth, I don’t know you.’ 13“Therefore keep watch, because you do not know the day or the hour.

← A tribute to unconditional love and Dr. Seuss..
The sinister plot …. and we are in it…. →