Summer Time, And The Livin’ Is Easy…. At least that’s the Big Picture….

In the dark of the night, he silently slips into the room…. he stares at her while she sleeps and quietly searches for the blood he longs for… he moves quickly, she has no time to react…

You might be thinking that this is a selection from a Twilight novel or some other vampire romance, but hold on, keep reading….. this is reality..

She suddenly awakes… opening her eyes to confusion and mild pain…she lifts her hand and swats the blood thirsty, pesky little mosquito away…

Yes, summertime is great for the most part…. relaxed schedules, swimming, sunshine, hummingbirds, sandy beaches, ocean water, vacations, waterparks, flowers, sitting under the pergola.… but last night’s itchy attack was just about enough to make me ready for cold weather.  I wouldn’t be surprised if the mosquitoes in my backyard don’t have babies named Citronella because it obviously means nothing negative to them.  I’m pretty positive that those mosquitoes in my neighborhood have apparently mutated and are totally immune to the pretty little candles that sit on my porch.  I can picture the scene now…

“Citronella! Come on, sweetie, ”  says Mama Mosquito, “We are going to go have dinner on this nice lady’s porch.  She even has a nice warm fire to attract us to her home.”    ” Yea!! Can we have s’mores too?” replies Baby Citronella.

So now, through my bitterness, I’m sure that it is apparent that I have been a victim of the ever blood thirsty mosquito.  Not only has the little vampire gotten me, but my family was attacked as well. …. Twilight, nothing.  Okay, I realize that mosquitoes are not technically vampires but they still are in the same category.  However, I’m sure the difference lies in the fact that there could never be a bestseller or a blockbuster teen romance about mosquitoes and their vices.  There is absolutely nothing attractive nor glamorous about mosquitoes…… or is there? 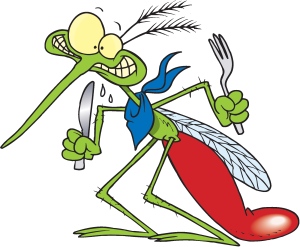 To conquer my itch I needed a remedy…something to soothe. So I began searching the internet for a homemade alternative to going back out to the store.  My search took me to something I never knew existed.   I found out that today is Mosquito Day.

Okay, since when did the mosquito become such an icon that it deserves it’s day in the limelight? A special day for Mosquito celebrating…. and to think that I thought a special Michael Jackson day was probably not a good idea…. Apparently there is something about the little itchy bloodsucker that I don’t understand.  I had always ranked it up there with all of those other annoying things that have peaked my curiosity as to why God created each.  You know, things like:

But since today is Mosquito Day and somewhere down in Texas they are planning an few days of good ol’ BBQ, country music and all sorts of mosquito competitions… not to mention, “Willie-Man-Chew” the 26ft mosquito mascot… what am I not getting???

I kept reading… the mosquito leg contest might be a competition that I’d rather not see but it looked like all other activities would provide good family fun.  That’s when I noticed something… I noticed that Dow was the host of this Mosquito Festival.  How convenient… could it be that Dow makes repellent for the pesky mosquito?  I’m thinking so.  I’m also thinking that if mosquitoes were obsolete then Dow wouldn’t need employees to make the chemicals to repel the pests.  Hmmm… now it is starting to make sense… at least to some degree.  We need mosquitoes so that Dow or any given chemical company can make repellent, hire people so they can have jobs and provide for their families.  Ah ha! I feel like I’ve solved a mystery. Okay,so maybe that was never really the plan that God … or maybe it was… regardless, God is so creative and I don’t always see the big picture.

I wonder how many other things I really don’t understand and instead tend to look at it through my narrow vision before I really give thought to what God is showing me.  Maybe the whole mosquito and insect repellent issue isn’t really some divine revelation from God but there are others…. Like knowing that we are supposed to take care of the “widows and orphans” and sadly taking care of them to a certain degree because of a feeling of obligation rather than love and care… and one day, while helping someone, I noticed her eyes…eyes of sadness, shame and helplessness…. that was a moment I needed… a realization to what I already knew but just didn’t understand… a moment I needed to make sense of what I was doing.  It opened a door to take my knowledge into the realm of compassion.

In Acts, Peter had a moment like that with Cornelius.  Peter knew that Jesus was for all, Jews and Gentiles.  But it wasn’t until he met Cornelius that it all truly seemed to click for him.  As you read the whole Cornelius/Peter dialogue you see Peter start out almost with obligation and routine but after listening to Cornelius speak, the figurative lightbulb turns on… Peter gets it.  He had the knowledge but just needed that “ah ha!”  moment. He needed to hear a Gentile speak about Christ in the same manner that a follower of Christ might speak.  It was like opening another door for him.

So what other big picture am I not seeing?  Hmmm, maybe like the slow driver who is keeping me from an appointment, or the rude driver who is honking at the slow driver who is keeping him from his appointment, or the waitress who seems distracted, or the person who looks to be abusing the system, or the child with the discipline problem… or big things like hunger, poverty and war…. maybe I’ll never view them as God does until he allows me to, if ever, but at least I can think about the situation and what the big picture is and hope for a compassion or an “ah-ha” moment.

Until then though, I will continue to swat at mosquitoes, but I will only swat at those who cross that barrier of repellent so as to not take away repellent making jobs and so “Willie-Man-Chew” can live on in Texas.  Live on, Willie!  Keep up the good work, Dow!

The next day Peter started out with them, and some of the brothers from Joppa went along. 24The following day he arrived in Caesarea. Cornelius was expecting them and had called together his relatives and close friends. 25As Peter entered the house, Cornelius met him and fell at his feet in reverence. 26But Peter made him get up. “Stand up,” he said, “I am only a man myself.”

27Talking with him, Peter went inside and found a large gathering of people. 28He said to them: “You are well aware that it is against our law for a Jew to associate with a Gentile or visit him. But God has shown me that I should not call any man impure or unclean. 29So when I was sent for, I came without raising any objection. May I ask why you sent for me?”

30Cornelius answered: “Four days ago I was in my house praying at this hour, at three in the afternoon. Suddenly a man in shining clothes stood before me 31and said, ‘Cornelius, God has heard your prayer and remembered your gifts to the poor. 32Send to Joppa for Simon who is called Peter. He is a guest in the home of Simon the tanner, who lives by the sea.’ 33So I sent for you immediately, and it was good of you to come. Now we are all here in the presence of God to listen to everything the Lord has commanded you to tell us.”

34Then Peter began to speak: “I now realize how true it is that God does not show favoritism 35but accepts men from every nation who fear him and do what is right. 36You know the message God sent to the people of Israel, telling the good news of peace through Jesus Christ, who is Lord of all. 37You know what has happened throughout Judea, beginning in Galilee after the baptism that John preached— 38how God anointed Jesus of Nazareth with the Holy Spirit and power, and how he went around doing good and healing all who were under the power of the devil, because God was with him.

One response to “Summer Time, And The Livin’ Is Easy…. At least that’s the Big Picture….”