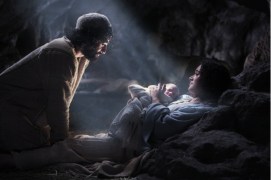 My youngest daughter had a big day recently.  She was invited to come back to her former school to receive an academic award in science. (Must be from her dad’s side) She was excited to go back to see one of her favorite teachers and to also see friends.  Actually, she was excited about every part of the day..ceremony… .. leaving her school early, lunch with her grandmother, getting to go home early instead of going back to school after program, etc.  She received her certificate and pin and I was very proud of her.

Later that evening she was in a play where she was one of the lead characters.  She did such a great job.  She had to act as if she is playing the trumpet and she boogied all over the stage with her horn.  She had many lines to memorize and timing was key… She did it beautifully.   Actually all of the kids did!  Another proud mom moment.

A friend of mine whose daughter was also in the play commented that she, too, was having a proud mama moment and even had another one the night before when her son won the MVP award at his football banquet.

I think most every parent has those moments that they don’t want to forget..(just ask a scrapbooker, a photographer, videographer or a journaler).  But we also have those moments that are rough and we want to forget…Rough moments like temper tantrums in public…. or….. siblings screaming because one had hurt the other…. or….experimenting with scissors and their beautiful long hair….. or…… the day the teacher calls to tell you that your child is failing a subject…. or…. a multitude of little (or big) imperfections.

Thinking that, for me,  just makes the whole story of Christ and his life growing up that much more relevant because Jesus’ mother, Mary,  had those moments to hold on to too….

The Bible says (in my own paraphrase) that Mary listened to the words of praise spoken about her baby, thought about them, held them close and then treasured them.  Later when we read about him being a preteen, we see his parents doing what I believe is a tad bit of discipline ( I do believe he was perfect but I also believe he was a child and still needed parental guidance)…Mary and Joseph can’t find Jesus… they search for three days only to find him teaching adults… The Bible says they were astonished but it also says they didn’t understand fully….

The astonishment of what others think about your child, the marveling at the thoughts of the greatness of your child, the treasured moments that you want to hold onto… that just makes Jesus’  family seem like your average family… Jesus’ family could have lived right down the street with their very average but loving family life…

Mary seems to have paid close attention to the words of others and to her son’s actions and from it was able to treasure these things about her son…. and then hold on to them when he had to save the world... and not stand in his way…

Whether you are a parent, a grandparent, an aunt, a sister, a brother or even none of these… It pays to listen to what God’s people say,  to look with depth into a situation and hold on to those when God is ready to do a great work in ourselves or the ones we love… it gives us the insight to set aside our desires and we can trust to let God do his thing….

As Mary rocked her sweet newborn, she held to the thought that her son was special…. more than just special but a savior

16So they hurried off and found Mary and Joseph, and the baby, who was lying in the manger. 17When they had seen him, they spread the word concerning what had been told them about this child, 18and all who heard it were amazed at what the shepherds said to them. 19But Mary treasured up all these things and pondered them in her heart. 20The shepherds returned, glorifying and praising God for all the things they had heard and seen, which were just as they had been told.

27Moved by the Spirit, he went into the temple courts. When the parents brought in the child Jesus to do for him what the custom of the Law required, 28Simeon took him in his arms and praised God, saying:
29“Sovereign Lord, as you have promised,
you now dismiss[a] your servant in peace.
30For my eyes have seen your salvation,
31which you have prepared in the sight of all people,
32a light for revelation to the Gentiles
and for glory to your people Israel.” 33The child’s father and mother marveled at what was said about him.

41Every year his parents went to Jerusalem for the Feast of the Passover. 42When he was twelve years old, they went up to the Feast, according to the custom. 43After the Feast was over, while his parents were returning home, the boy Jesus stayed behind in Jerusalem, but they were unaware of it. 44Thinking he was in their company, they traveled on for a day. Then they began looking for him among their relatives and friends. 45When they did not find him, they went back to Jerusalem to look for him. 46After three days they found him in the temple courts, sitting among the teachers, listening to them and asking them questions. 47Everyone who heard him was amazed at his understanding and his answers. 48When his parents saw him, they were astonished. His mother said to him, “Son, why have you treated us like this? Your father and I have been anxiously searching for you.”

49“Why were you searching for me?” he asked. “Didn’t you know I had to be in my Father’s house?” 50But they did not understand what he was saying to them.

51Then he went down to Nazareth with them and was obedient to them. But his mother treasured all these things in her heart. 52And Jesus grew in wisdom and stature, and in favor with God and men.

Posted by Nancy on December 6, 2012 in Advent, Devotions, Faith