I be wantin me some treasure…. Arrrr….. 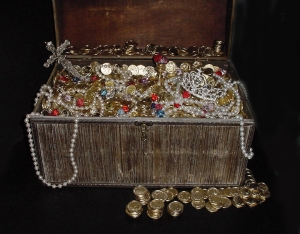 Maybe you are like me and you can reflect over a time period and then think of something that you find to be pretty valuable.  Possibly a funny story to remember, a heart-warming incident that you never want to forget, an observation that strikes you as pretty amazing, or maybe even a lesson learned… Well, I had one of those times this weekend where I could just reflect on current little things that I would consider little treasures…. I think I’ll call it “mind booty” (what’s a treasure without pirate talk, yer know… arrrrr)… the treasure that is swiped right out of your mind…

Here’s the booty.. one jewel at a time…

Jewel #1– Lesson Learned- Even if the car in front of you does it too…..the “right turn only”

Jewel #3–Amazing observation- Children of today, who live in a high-tech society, have 24/7 communication with others (cell phones, internet….yes, even little children), have received more information by age 10 than a 15 year-old would have 15 years ago, are able to play sports, exercise their bodies and exercise military operations from the comfort of their couch with a joystick (and if they have a Wii they may possibly stand up)… all of this and they still enjoy playing in a cardboard box

Jewel #5– Heart warming moment- No matter how old you are and no matter if you see it every year, there is still something special about those events that  Disney puts together..

Each one of those little incidents, for whatever reason, make up memories that I don’t want to forget.. a little treasure or mind booty (arrrr…)

I love that about the Bible too.  I can read something one time and read it again later only to see something that I didn’t catch before… like yesterday… I have read the story of how Jesus was betrayed many times.  I know the whole  kiss on the cheek, ear cut off, denying of the denial, the false allegations, etc., but I caught something last night that I have either skimmed over in the past or just never seen.   It is  Mark 14:51-52.  It tells of a young man who had been following Jesus and his disciples. When all of the action of the arrest was taking place someone grabbed this guy and in doing so, his clothes ripped right off and he ran away naked…it is not mentioned in any other account of the arrest, just in Mark and it is only two little sentences.    At first I thought that it was kind of funny…  I chuckled as I pictured the scene of him being scared out of his clothes.  Then I thought about it (arrr…. searched for the treasure) ….right before that little story it said that everyone deserted Christ and ran… This guy didn’t get away in time so he did what he had to do… ran naked…

In that reflection I  wondered if I have ever run away from Christ when times got a little scary.. When Christ asked me to do something that made me feel a little fearful and instead of trusting, I ran?…My rebellious pirate answer? “Aye,”….. I have and I might just be able to say that when I felt trapped, I did what I thought I  had to do to run away from Christ …..not even considering about how I was acting or even how I looked as I took those steps….

Fortunately, we have a loving God who wants to be our treasure.  He knows when we are running scared and he is ready and waiting to give us fresh clothes, nourishment and guide us in the direction we know we should have gone in the first place.  And the best part-he doesn’t leave us running by ourselves…  I’m thankful that I ran back.

Are you running to or from your treasure?

43Just as he was speaking, Judas, one of the Twelve, appeared. With him was a crowd armed with swords and clubs, sent from the chief priests, the teachers of the law, and the elders.

44Now the betrayer had arranged a signal with them: “The one I kiss is the man; arrest him and lead him away under guard.” 45Going at once to Jesus, Judas said, “Rabbi!” and kissed him. 46The men seized Jesus and arrested him. 47Then one of those standing near drew his sword and struck the servant of the high priest, cutting off his ear.

48“Am I leading a rebellion,” said Jesus, “that you have come out with swords and clubs to capture me? 49Every day I was with you, teaching in the temple courts, and you did not arrest me. But the Scriptures must be fulfilled.” 50Then everyone deserted him and fled.

51A young man, wearing nothing but a linen garment, was following Jesus. When they seized him, 52he fled naked, leaving his garment behind.